The Importance of Online Activism

What is online activism?

Internet activism is a form of activism that uses tools offered by online technologies: that is social media, e-mail, e-campaigning, and other internet tools. This may include protesting, campaigning, fundraising, lobbying, mobilizing and organizing people against a common cause. From the 80s onwards there have been multiple examples of both successful and less successful movements that started off from the internet, or pre-existed and used different online tools to expand, to spread the word, and to diversify their methods and goals. Here one can find a brief history of online activism.

Today we live in an era where the Internet offers the ability to have your voice heard and to connect with practically everybody. Most politicians use social media like Facebook, Youtube and Twitter. E-petitions can gather millions of signatures to advocate against or in favor of political action, and the use of various platforms like change.org, avaaz.com and moveon.org tremendously facilitates getting people from all over the world to work together for change.

The Internet is also a necessary tool for the democratic spread of information through social media, blogging and microblogging, as mainstream media often cover limited viewpoints on current events. Public opinion is largely shaped by online information and discussion. NGOs and independent organizations use social media to communicate with the people, to lobby politicians, to organize protests and street actions, and to render information accessible to people from different backgrounds. Last but not least, the Internet makes donation and finding money for social causes easier through fundraising platforms.

Despite its importance and overall success, there are several concerns about online activism. The most usually verbalized one is that online activism is a form of “slacktivism” – a word made of “slack” and “activism”, meaning that it is a type of activism that people who are lazy or lack commitment engage in to pretend that they contribute to social issues. The term is derived from a comparison between online activism and what are considered to be more traditional forms of activism, such as marching, street actions, hunger strikes, peaceful protests, boycotting etc. Slacktivism is described as a “feel-good” activism, to make oneself feel like they are participating when, according to critics, they are just scrolling through Facebook. “Clicktivism” is another terms that describes the form of activism that relies on liking, sharing and commenting.

Other concerns have to do with the flood of information that doesn’t always allow for critical evaluation, and the misinformation that comes with the problematic content that is often unsourced and inaccurate. Many people also argue that, while online activism may be quite helpful when it comes to shaping public opinion, to spark interest and get the message across, it often fails to maintain the movement and result to actual social and political change, as opposed to traditional activism. Bringing actual change demands a great extent of offline commitment and organization. Here you can find some examples of online activism campaigns that either missed the point a bit or didn’t manage to ignite the change they were aiming at.

What’s more, there are some ethical issues concerning the use of online tools for activist purposes: some critics worry about the line between facts and beliefs becoming blurry, violations of privacy and copyright, people being financially exploited for personal interests, and “sectors of online activism [being] more self-interested than socially interested”.

Additionally, there is the issue of involvement and accessibility. Not everyone has access to a smartphone, a computer, or an internet connection. Poor and homeless people, or citizens of parts of the world like Iran, India or China where either full access to the Internet, literacy, or both are not given things.

The importance of online activism

The use of the term “slacktivism” is often unfair and inaccurate. While it is very valid to acknowledge that there is a long way between effective campaigns and successful movements, and the hashtags that first spark conversation, online activism is not less valuable than traditional activism, and has certain advantages we should not overlook.

First of all, online activism is far more accessible to disabled people, physically and mentally ill people, poor people who cannot cover travel costs, as well as migrants and refugees. The Internet offers outlets to people for whom traditional activism events and activities may be inaccessible. This makes activism more intersectional and democratic, since it offers a way for people who are less privileged in certain ways to participate, and avoid the creation of unequal power dynamics that exclude them from movements.

There are many factors of online activism that make it valuable and effective. First of all, Internet tools make it easy for us to connect with a vast amount of people from all around the world, people we wouldn’t have the chance to meet, communicate with and mobilize otherwise. Millions of people use social media each day, rendering it possible to spread an important social message to all corners of the world.

Furthermore, as mentioned above, online activism is accessible to most people for whom physical presence and action is limited, and the spreading of information becomes more varied and balanced, as more voices get the chance to share their experiences and thoughts. Additionally, through the Internet we get the chance to learn more about other cultures and peoples in order to become more respectful, thoughtful and inclusive in our movements.

[URISP id=4260]
It is true that not all Internet movements using hashtags, petitions or shares will be effective and successful, but in reality, neither are all traditional movements and their actions. The reason it is called activism is because it requires constant action, dedication and, oftentimes, luck. Bringing change is really hard; it takes time, effort and is often a step-by-step process. The Internet provides tool that have proven to be very helpful in sparking interest, informing and mobilizing large numbers of people. This is why online activism is not less important than traditional activism, and does not necessarily show that people of our generation are lazy and do not care for social issues.

The repeal of net neutrality will affect online activism

Net neutrality is what has kept the Internet free and accessible to all so far. It means that Internet service providers enable access to all content and applications regardless of the source, and without favoring or blocking certain products or websites. 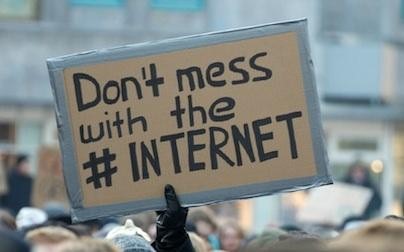 A vote to ban net neutrality has been scheduled for this December by the U.S. Federal Communications Commission. That means that U.S. citizens will have to pay, apart from their Internet connection, for certain Internet packages, including access to Google, Amazon, Youtube etc. Access to the Internet will thus become extremely privileged to a small portion of the population, if the ban passes.

The repeal of net neutrality will constitute a violation of human rights, as well as an immediate threat to online activism and democracy. But how is that going to happen?

In 2012, the Human Rights Council of the UN established that access to the internet is a human right, and encouraged nations without widespread internet access to expand it to all citizens. The internet provides free access to information and the right to freedom of expression, which are both fundamental elements of democracy.

Thus, it becomes evident that net neutrality matters to free speech, sharing information, mobilizing people and organizing movements. Net neutrality is a key foundation for online activism, free speech and democratic spreading of information. Its ban will signal an era of censorship and privileging the already privileged against movements of social change.

Here is what you can do to protect net neutrality.

How many lgbt flags are there?

There are many different lgbt flags, each with their own meaning and history. The most well-known flag is the rainbow flag, which was created in 1978 by Gilbert Baker. This flag has become a symbol of pride for the LGBT community worldwide. Other popular lgbt flags include the transgender flag, bisexual flag, and asexual flag. Each of these flags represents a different aspect of the LGBT community and helps to create visibility for people who may not feel represented by the mainstream gay rights movement.

What challenges do members of the LGBT community face?

Members of the LGBT community face many unique challenges. For example, they may experience discrimination from family members, friends, or strangers. They may also have difficulty finding inclusive communities or safe spaces. Additionally, many LGBT people struggle with their mental health due to the stress of living in a society that often rejects them. Despite the challenges, there is also a strong sense of community and support within the LGBT population. There are many organizations and resources available to help members of this community thrive.